xsaltire
Metro Manila, Philippines
started blogging in 2007, at first about social issues and his travels but later dabbling into his favourite subject: food. While his knowledge of gastronomy and the culinary arts is mostly theoretical, he has been known to dabble into the practical side during weekends, sometimes with edible results.

My $1 tip on the ups, downs, spins, and gyrations of slippery polls.
If you've been following the US presidential elections (you really should even if you're not American, because the US president affects you so much as your own president) you'd be constantly bombarded with opinion polls, most of them saying that Obama has a lead over McCain.  Some will say that Obama has a "commanding" or "clear" lead, while others will insist that McCain is in a tie with his opponent.  So what is it, really?
Without going into technical detail, let us interpret for ourselves what the polls mean without the spin.  Take this table from Real Clear Politics (as of 29 October 2008, 2300H Pacific Time), which convenietly summarises the major US election polls (click for a clearer image): 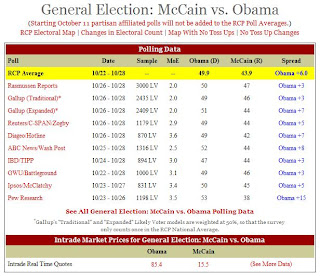 First of all, see that top line with the RCP Average?  Forget it exists.  It means absolutely nothing.  It makes no sense to get the average of different surveys taken on different dates with different questionnaires and different samples and different methodologies.  And to show how sensless it is they even highlighted it in yellow.
The first thing you should look for in any survey is the margin of error (MoE in the table), which, assuming the survey is methodologically sound, depends solely on the sample size.  Say the Rasmussen Reports, with a sample size of 3,000 likely voters and MoE = 2.0 (it should really be 1.79), finds that 50% of their sample supports Obama.  The MoE imples that overall support for Obama in the population (i.e., all American voters) is probably somewhere between 48% and 52%.  Likewise, McCain's 47% support in the survey implies that support in the population is probably somewhere between 45% and 49%.
So, is Obama's 3-percentage-point lead "clear", or "dead even"?  As a rule of thumb (i.e., without having to use a calculator), a difference can be reported as significant if it is greater than or equal to (MoE x 2) + 1.  Using this formula, for MoE = 2 the difference should be at least 5 percentage points for us to say that Obama has a significant lead over McCain (i.e., beyond the margins); thus, Obama's 3-point lead in the Rasmussen Reports is actually a statistical tie.
Looking at the table, then, we can see that the only surveys where Obama has a significant lead over McCain are Gallup (Expanded), ABC News/Wash Post, and Pew Research.  All the other surveys have Obama and McCain in a statistical tie.  That said, all the polls put Obama in a marginal, if not significant, lead.  Either Obama leads by a small amount or he leads by a sizeable margin.  So, going by the polls, I'd have to say that Obama is the frontrunner in this election.  Overall, assuming the surveys were conducted scientifically, the elections are still Obama's to lose and McCain has an uphill battle ahead.
However, this being America and Obama being not white, I actually think McCain is still the candidate to beat.  Obama has to run a perfect campaign 100% of the time, while McCain only needs one innuendo that sticks to grab the election.  Whether he relishes it or not, McCain has hundreds of years of racism, prejudice, and cynicism on his side.  Never underestimate the power of hate, fear, and ignorance in America.
I sure hope I'll be proven wrong next week.
Posted by xsaltire at 11:11 PM No comments: Links to this post

Finally, McCain is taking it to Obama, and taking it hard.  First the terrorism link and now calling Obama a socialist for wanting to "spread the wealth around" (Obama's words).  Yeah, who the $#%@ wants that?  Who the $#%@ cares about the poor during an economic crisis?  McCain's plan is so much better-- don't give the poor tax breaks so the rich won't have to be taxed more.  Trickle-down economics has been working so well anyway.
So McCain slipped up by saying Obama is a decent family man, but we now have the McCain-Palin we've always wanted-- name calling and fear mongering.
Obama is just so wrong for America.  Obama, that madrassah-studying, terrorist-palling, income-redistributing, Jeremiah-Wright-following, smooth-talking closet Muslim/Arab poser for the US presidency.  It's true, I heard it on Fox News.  Only fair and balanced facts from Sean Hannity.
I'm so glad McCain is taking it to Obama.  Really nothing like hate, fear, and ignorance to get him back up in the polls.
Posted by xsaltire at 4:56 AM No comments: Links to this post

Word of the Day

Ever have one of those days when a word or a name gets stuck in your head? It's like the dreaded last-song-syndrome but without the melody. Even worse, you can't easily place where and when you heard it, and its meaning momentarily escapes you. Here's mine for today:

A Catalan sausage made of raw pork and spices, related to the Portuguese linguiça and Spanish longaniza.  Read about it here (Google English translation here).
Also a Catalan card game.
Posted by xsaltire at 11:52 AM No comments: Links to this post

Labels: word of the day

And the winner is...

... Paul Krugman, "for his analysis of trade patterns and location of economic activity".

See the scientific background here.  And I quote:

"It was Paul Krugman who most clearly and forcefully articulated the revolutionary nature of this new approach for the theory of international trade. His short paper in the Journal of International Economics, entitled 'Increasing Returns, Monopolistic Competition and International Trade' (1979a), is twofold. It contains not only a new trade theory that allows us to explain observed patterns of intra-industry trade, but also the seeds of a new economic geography where the location of production factors and economic activity can be stringently analyzed within the framework of a general-equilibrium model. Remarkably, the paper achieves all of this in only ten pages, and in a very simple and transparent fashion." [emphasis mine]

Wow, a Nobel Prize-winning paper in only ten pages.  Dang.
Posted by xsaltire at 10:54 AM No comments: Links to this post